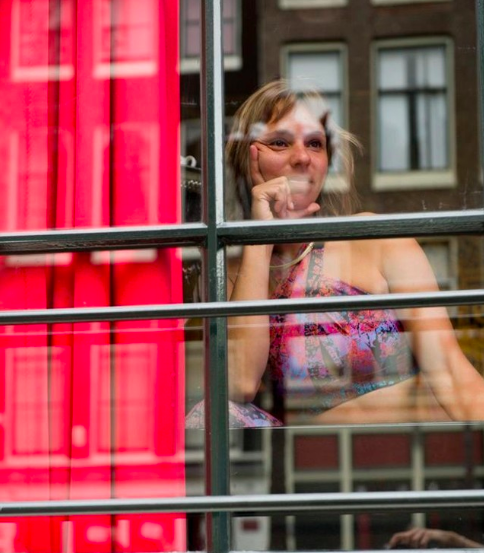 Looking back I can say that it’s been perfect the way it was.
Not being able to do the exposition in the way we had it in mind gave an even deeper and more truthful experience. Being looked at from the outside as if I was a sex worker (which of course I was in their eyes), was a super intense, edgy and powerful experience.The biggest challenge for me was to feel comfortable in my own skin in this unusual environment. The first thing I had to let go was to mind what other people think about me. I kept on telling myself – I know who I am. I know why I am here and I know why I’m doing this. And that’s what matters. Not the stories other people create about me without knowing anything about my past or my intentions.In the moment I was at peace with myself I could dare to make real contact without any awkwardness, shame or guilt.Even though I’ve had many small, meaningful moments of connection through the window, for quite a while no one dared to actually come in. And you know what I’ve noticed with surprise –   the men passing by were as insecure as I was about making the next move. After I had seen one man passing by my window several times being clearly interested in me I opened the door a tiny little bit, smiled at him and said, ‘hey you, you look like you would like to come in for an experience.’ Instead of having the regular talk that would have to happen at that point about pricing and options, I briefly shared with him the idea behind the slow sex experience pop-up. He said that he was on his way to the station which is right behind the Red Light District. The way I was looking straight into his eyes, right into his soul had such an impact on him that he was finding himself taking one round after the other in order to catch my gaze again and again and again to see whether the magic would still be there.When I closed the door behind us my friends that were standing outside got really worried they told me afterwards. Now it has become real. The first slow sex experience that has ever happened in the Red Light District was about to take place.
The feedback was absolutely mind blowing and exceeded all my expectations.From around 3pm on until the end, I had pretty much one customer after the other. People were standing in line, having to take rounds while they were waiting to get their turn.Just before the end of my first shift as a slow sex worker, I had to send people away cause there was no more time left to recieve all of them.There is definitely a demand for a different kind of sexual experience that goes beyond the regular in-and-out, blow job business most people come for simply because they don’t know that there are other ways…Would I do it again?Oh yes, absolutely!That was just the beginning of a new kind of revolution.Follow Slow Sex Experience on Instagram and you’ll be informed about the next one happening. 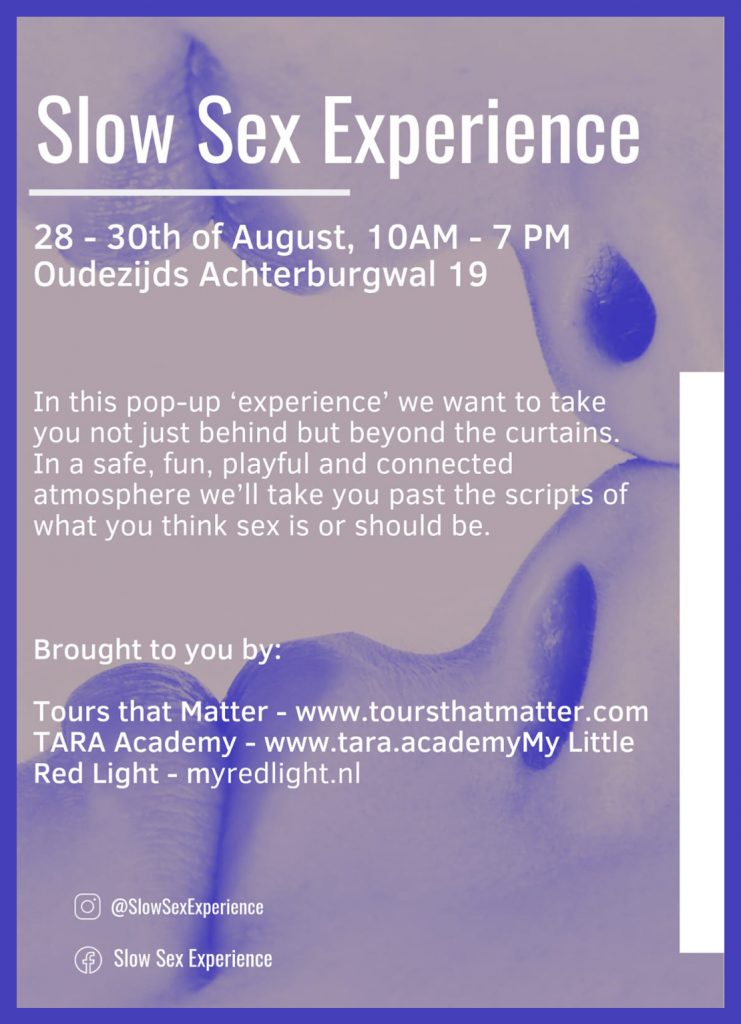 It’s hard to describe, you let go of your surroundings, find focus on the person in front of you, first their face, then them as a whole, your breathing comes together. With all the same tension as the most caring intimate sex, but the expectation is gone, the self consciousness gone. There’s nothing else, just a deep energy throughout each others body and between.
Will, customer Slow Sex Experience