WE TAKE YOU BEYOND THE SCRIPT

Sexual energy is the most powerful energy there is. Let’s fucking own it!

How can we decolonise our (sexual) conditioning and break through unhealthy patterns so that we can fully unfold our (sexual) potential?

The Slow Sex Experience empowers you to connect deeply to yourself, to feel what is present in you in each moment and to communicate your boundaries in a non-violent way. In a safe space we experience how intimacy and connection can be created in almost an instant even with a complete stranger or with a long term partner and how we can transform the sexual energy that might arise in an encounter for healing.

You will learn how to access and listen to your most hidden sexual desires and how to build a healthy and respectful relationship with your body – which is a sacred temple, a portal to immense pleasure and joy, a highway to heaven… 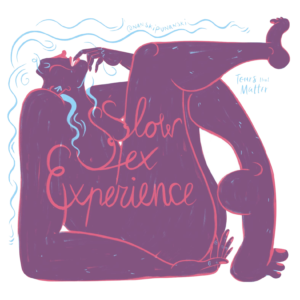 What is it all about?

The Slow Sex Experience is an eye opening and healing experience for everyone who is longing for creating a new kind of sexuality. A sexuality that is about deep intimacy and connection to the higher source, cultivating creativity and enhancing life energy.

You are highly encouraged to take the tools you will be provided with out of the context of sexuality and to translate them into your every day life. It will transform all your relations!
Keys & Tools

The key is going slowly and without goal orientation: We need to take out speed big times in order to be able to feel what is really alive in us. Let’s explore which realms open up if we consciously chose to switch off google body and take another route other than the ‘highway to orgasm’

An important tool we work with is communication:  We need to learn how to communicate our needs, desires, boundaries in a healthy way.

A new realm we explore is energetic love making combined with breath work. You are being invited to move beyond the physical body and explore:

What is going to happen?

Katjalisa is one of the three co-founders of Tours that Matter. She has studied Anthropology in Amsterdam and has done in depth research in the Red Light District for almost a decade about ‘sex as a good of consumption’. She’s been the first one to introduce the concept of the slow sex in the RLD.

Next to her academic background, she is also trained in somatic work, bio-energetics, yoni massage, yoga, meditation, mindfulness and non-violent communication. She has many years of experience in creating a safe space in which everyone feels seen, loved and respected. Her way of working is edgy and yet very accessible. She playfully gets people out of their comfort zone and invites them to open up to new experiences. Her authenticity is contagious and her power empowers others.

Amir is the founder of the Inner Work-Out. He has served for five years in a special force unit of the Israeli Defence Forces, where he experienced the synchronicity and connection of an organic team, as well as the endless pain and sufferings of a conflict. Later, he realised the impact of dialogue, and witnessed how it can bring healing, accelerate growth and build real human connections, both in, and outside of the business world. The essence of the future he is trying to create allows deep dialogue, full presence with each other and ownership of our personal growth. Amir holds a degree in organisational Psychology with complementary experience in Theory U, SPT (embodied meditation), and Mediation.

NEW EVENTS COMING UP IN AUGUST 2022 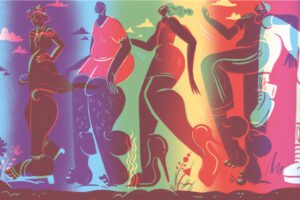 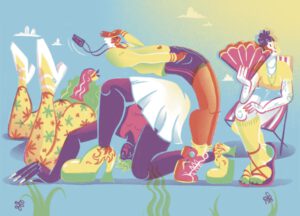 If you have any questions, please contact our Community Manager Sophie Brokmann through: scbrokmann@gmail.com or +316 242 806 58. Also please feel free to get in touch with us for more in depth personal guidance, advice and inspiration.

"The slow sex experience led by Katjalisa Reiter is an unforgettable night. I really liked how she facilitated it. Very slowly you get in to the mood and it’s all about connecting with others. On my night there was a surplus of men. I did almost every exercise with a man and although I am straight it didn’t bother me because it’s not about sexuality it’s about connecting from human to human."
Kor Hoebe
"Katjalisa welcomes all of your being so naturally and with such warmth that you are immediately put at ease. The love labs for me have been a deep source of nourishment and opportunity to be held in a safe container of integrity that allows me to melt into the different aspects that want to appear in each moment. Be that soft and tender, contracted and shy, wild and open or medatative and sacred. A container of trust is held with guidance that is inclusive and clear. If the space requires more sharing and talking or more play all is welcome and each evening felt in tune with the needs of the group and what was called forth from each of us. I am deeply grateful for theses spaces to explore myself and each other in full trust."
Mhaire Sinclair- Scotland
With her big sense of humour, Katjalisa guided us beyond our fears, to the most extraordinary connections with perfect strangers. An unforgettable evening!
Elena Simons
Previous
Next